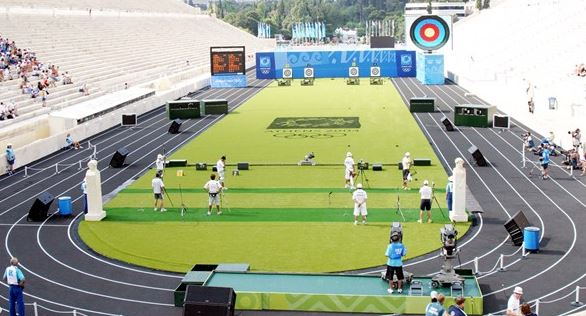 
Archery’s competition at the 2004 Games is one of the most memorable in the sport’s Olympic history.
Pavlos Tzivanakis, competition manager at the Athens 2004 Olympic Games, has died after an illness.
Tzivanakis worked with World Archery Excellence Centre director Juan Carlos Holgado to plan and deliver one of the most memorable archery competitions in Olympic history, set against the backdrop of the two-millennia old Panathenaic Stadium.
He was an architect by profession and received a silver plaquette from World Archery in 2005 in recognition of his contribution to the sport.
“Pavlo was a real example of a good man. With a huge heart and the capacity to truly listen to anybody who wanted to share something with him, he was equally as willing to offer his own perspective or help to anybody who wanted it,” said Juan Carlos.
“I have many memories of the life experiences he shared with me. It was a pleasure to work with Pavlo and an honour to learn at his side. He has left a lasting impact on my life. Rest in peace, Pavlo.”
Secretary general Tom Dielen added:
“Pavlo Tzivanakis will forever be linked to the memories of archery’s iconic venue at the unforgettable Olympic Games in Athens. On behalf of World Archery, my condolences go to his family and friends.”